First off – Happy New Year!  I cannot believe it si 2012, let alone already a week into the New Year.

Yesterday, Stella and I went to the Seattle Aquarium.  Recently, Stella has tons of energy – I mean she is buzzing, and I just can’t seem to find a way to really help her expend it all. So, spending a few hours just walking around and looking at fish sounded  like a good attempt at burning some of it.

I set the rule – “you either walk or ride in the stroller – I am not going to carry you” and we packed up and headed out.

It was meant to be – we arrived downtown quickly and as we started our hunt for parking, a group of people were leaving and not only gave us their spot, but the time the had left on the meter – which was over an hour and a half – I wasn’t sure if that was enough time and first, but figured that we could always plug the meter if needed.  I had a coupon for our admission fee that I had bought a few months back from Google Offers, so we basically just paid for the cost of gas to get to and from, not too bad if you ask me. 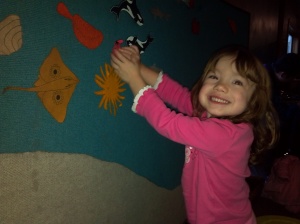 Once we got through the line and into the door, Stella was off and running and I was chasing her like a crazy women, pushing through the crowds with empty stroller in tow.  We stopped and looked at a few fish in some big tanks and then headed to the touch tanks, where we spent a solid bit of time touching various starfish and other marine animals.  Once she got bored with that, we zoomed through various exhibits only to stop momentarily at an exhibit for kids where they could sit and stick felt fish to the wall.  Since Stella loves art, she actually paused long enough to allow me to  finally take a picture (at left).

I thought we were going to have a crisis when we passed by a face painting station.  I am horrible about carrying cash and since I had none, we could not get Stella’s face painted.  She asked, I told her I had no money, she hesitated for one second and then was off to the next exhibit, no harm no foul – phew (Stella loves having her face painted, a must-do every time we go to the zoo).

We then zoomed through various other exhibits in record speed (I don’t have much patience for museums and such, but Stella was 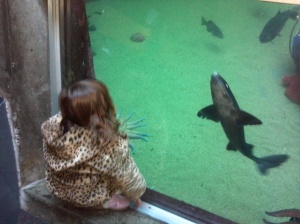 going through much faster than even me – and do note, I made it through the Sistine Chapel at a very fast clip). Stella paused at the underwater observatory – finally another photo-op – where she was temporarily mesmerized by a diver as he fed some very large fish (at right).

We sped past all of the marine animals – sorry otters, you are super cute, but apparently not cute enough to keep Stella’s attention. And, of course, ended in the gift shop.  The one thing I so dislike about all of these places – the gift shop. It is their sneaky way of forcing you to buy something.  Fortunately for me, Stella’s over abundant energy effected her attention span, so after she spent a good amount of time touching everything, we headed for home.

Turns out our hour and a half of meter time was just the right amount of time – thank you strangers for your random act of kindness.

Stella spent our quick journey back home munching on snacks (a staple in our lives) and reflecting on our journey. No nap, but at least some of her energy was expended and she was a little calmer for the rest of the evening.

Now to figure out other ways to burn energy…any ideas?

2 thoughts on “A Trip to the Aquarium”