It was another cold, gray Seattle day and Stella and I were tired of being inside.  So, we headed down to the Seattle Waterfront to scope out the carousel and arcade.  We were at Chuck E. Cheese not to long ago, so it only made sense to go on a mini arcade tour.  This way, we would at least know all the “hot spots” for over-priced, well, everything.

We were lucky enough to score a parking spot under the viaduct, right across from Pier 57 and our destination.  We scrambled in to Pier 57 and were greeted by the whizzing carousel.  Stella was so excited that the carousel was going around so quickly.

It was a slow day for the arcade and carousel, lucky for us!  We paid our $2.50 and went on a solo ride. 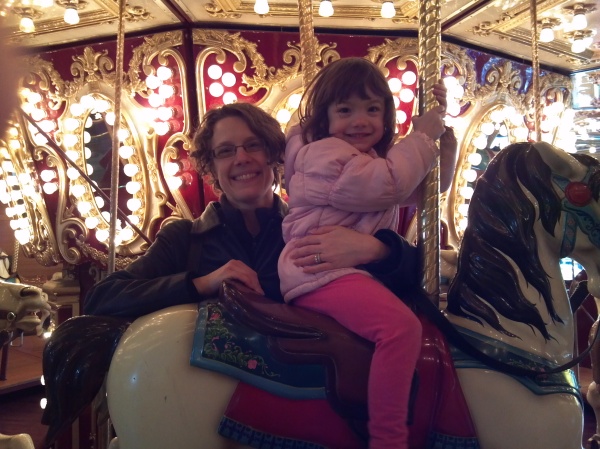 After our ride, we strolled around the Seattle Waterfront Arcade, dropped another $2.50 and walked out with two princess tattoos.  Once again proving that arcade games are not my strong suit! I have to admit, I liked Chuck E. Cheese better (crazy, I know).  This arcade was older, only took quarters, was small and dark.  I guess when it comes to an outing with a little one I prefer well lit spaces.

Overall though, it was a fun little outing and broke up the monotony of our day.